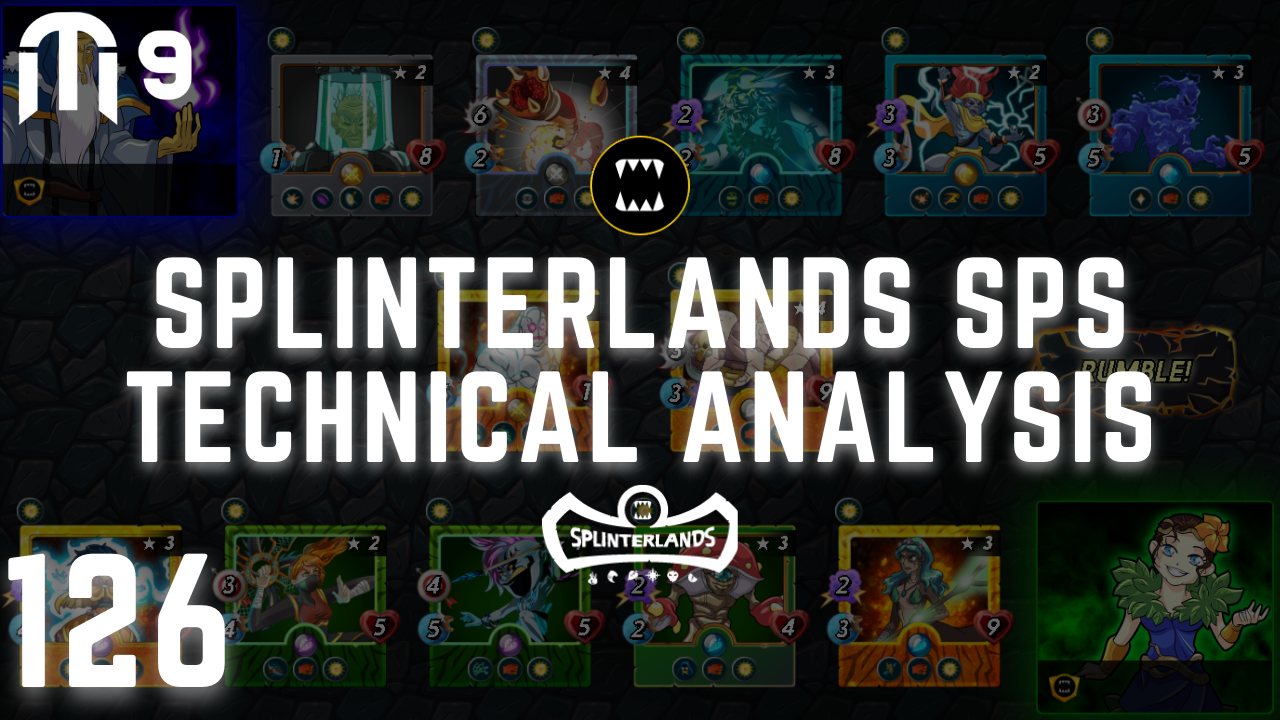 Chaos Legion's pre-sale window will be unlocking in less than seven days, and with the voucher system now in place, hopefully, more players will be able to get their hands on packs. Yes, the vouchers are still behind a paywall in those players with large amounts of SPS staked, but those that weren't around during the Land pre-sale windows where Land was sold out in minutes which left many players frustrated. So the voucher system should be an improvement. Only time will tell.

The hype and euphoria of the Chaos Legion pre-sale have affected the price of SPS. The price of SPS has been up 249% over the past 30-day window. And the question is whether this growth is sustainable? What does traditional technical analysis tell us about the SPS price action, and can we determine where to next with the price of SPS?

Unfortunately, SPS is not available on Trading View and therefore using coingecko charts, so that the analysis will be limited.

Before the actual details of the Chaos Legion pre-sale were published, we saw the major resistance between the $0.45 and $0.5 zone as the price of SPS 3 times bounced down after hitting this resistance. However, once the news was released, the major resistance was blown through. Currently, we are hitting a major longer-term resistance at the $0.9 zone. Some exchanges even saw the price of SPS hit $1, but we have seen some consolidation now, with the price trading between the $0.83 and $0.87 zone. If the scenario of weak hands continuously selling and the volumes start to dwindle, we may see the price of SPS drop to its next major support zone, which is around the $0.6 and $0.65 area. 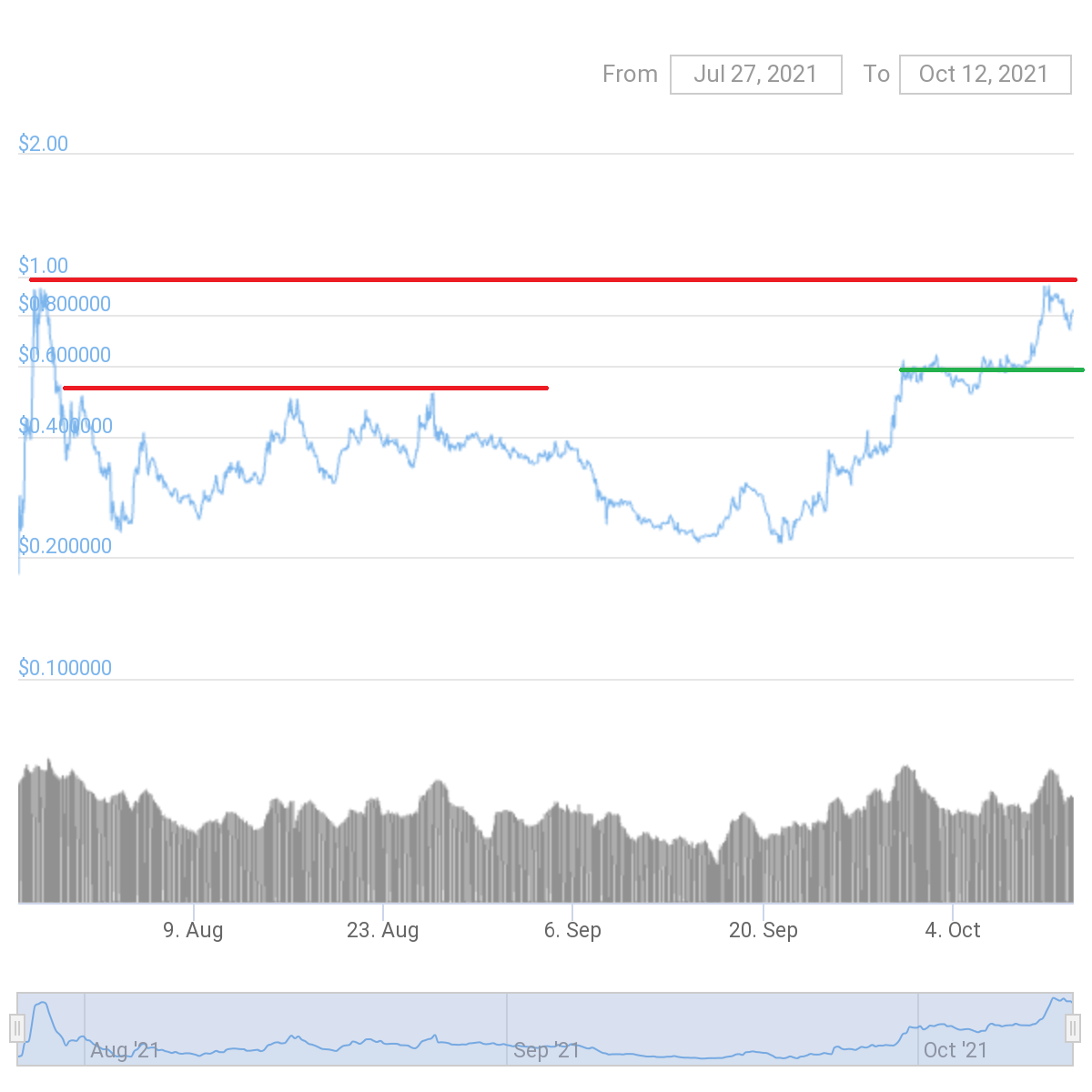 In a shorter timeframe, we are seeing a rising wedge formation being formed. Traditionally a rising wedge occurs when a share price consolidates between an upward-moving wedge-type pattern. A rising wedge in an uptrend market generally signals a reversal is on the horizon, with the next major market move being down. We also see a market structure of lower highs and lower lows formed, which generally points to a bearish market structure. 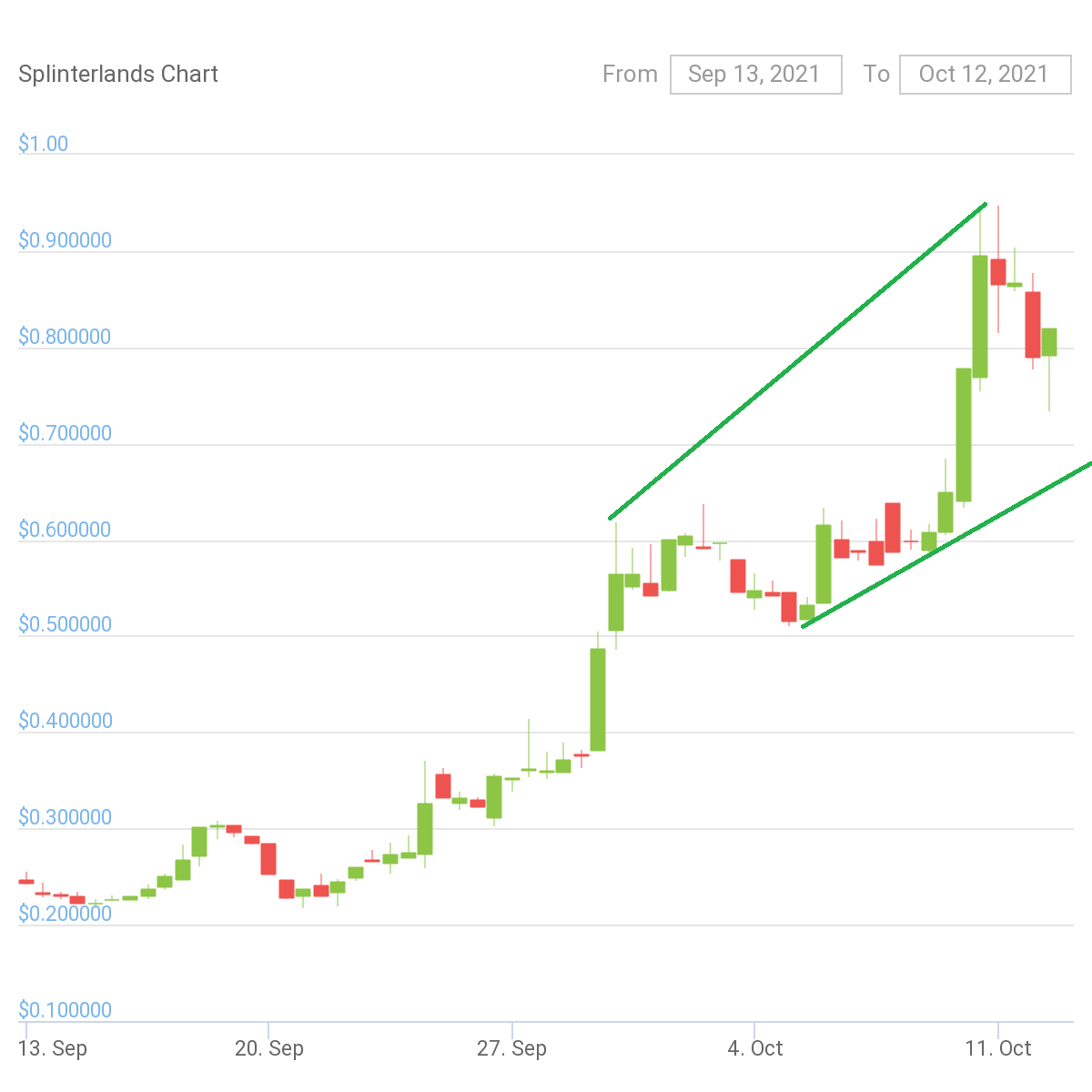 The topic of technical analysis constantly stirs up many vast opinions. It's almost as bad as religion and politics, but regardless, some technical analysis should be considered. However, we know being in crypto space, hype, euphoria, and FOMO are powerful, and no matter how rational you try to explain things, you can't stand in front of a bull train.

This comes to the final point of this post. I came across The Coin Perspective, which takes any crypto coin and compares it to another. What would happen if SPS had to get to a marketcap of BTC? 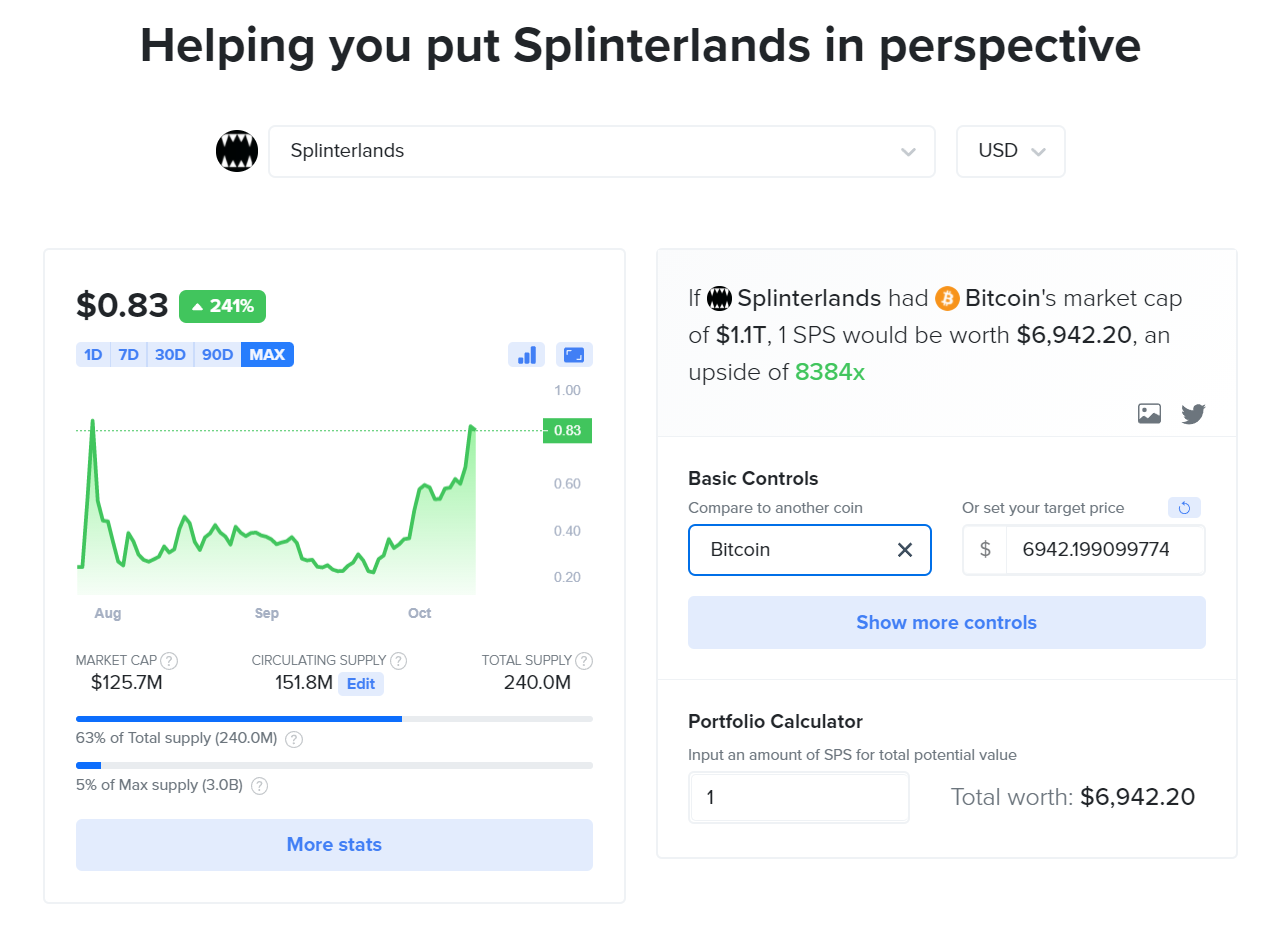 You may be laughing at how ridiculous this is, and frankly, you would be deluded to think splinterlands could reach BTC's marketcap. However, a more realistic comparison would be to see if SPS would get the same marketcap as Axie Infinity. 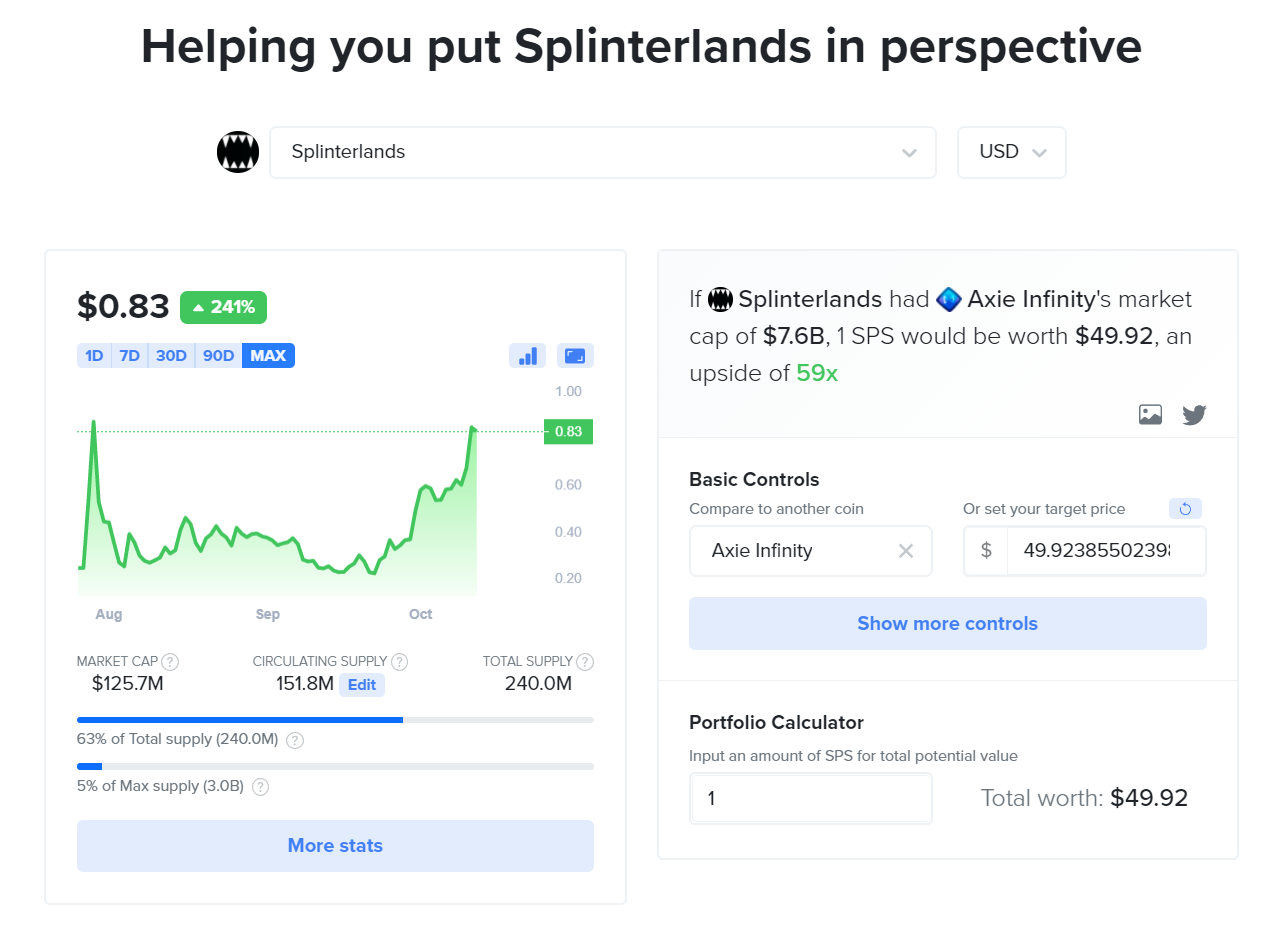 Again it does seem like a far-fetched dream, but who knows? A year ago, the growth that splinterlands has experienced was also just a dream, and now it's a reality. So you never know.

Are you new to splinterlands and want to learn to play the game? Check out my Ultimate Guide to Splinterlands: A Collection of Articles and Guides 2021. If you enjoy reading my splinterlands content, please follow and support me by signing up to playing splinterlands through my affiliate link: https://splinterlands.com?ref=mercurial9. We both would have a chance to receive a cool NFT!

Thank you for reading, and I hope you have a good rest of the day!

I like the comparison to Axie - especially because both games were somewhat first movers, both have a governance coin, which you looked at. It feels like scarcity really drives Axie in ways that are not applicable to Splinterlands, and the high price of entry might create a willingness to pay premium for related currency to protect the investment. I wonder if SAND or MANA would make good comparisons? I do not play any of the other games, so I really do not know.

It's interestint that the TA shows precisely what people DON'T want to hear.

A further announcement posts clarifying what VOUCHER can be used for in the future might change all of this, of course!

However, we know being in crypto space, hype, euphoria, and FOMO are powerful, and no matter how rational you try to explain things, you can't stand in front of a bull train.

That is very well said! It's like tons of black swans along the way lol

100% at black swan event! Thanks for picking my post.

Thanks for letting me know of thecoinperspective.com.
Now I know I'll spend my noon comparing any coin to any other coin. Great post!